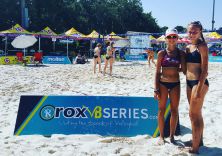 Less than ONE WEEK LEFT!

Who is ready for warm weather as much as we are??

Want to set yourself apart from everyone else??

Sand volleyball increases:
Vertical
Stamina/quickness
Strength/conditioning
Leadership skills-athletes are their own coach
Communication
teamwork on the court
Ball control
Competitive Edge
Teaches to be positively---ASSERTIVE!
2018 was our MOST successful season yet..
we remain the #1 beach club in the state of WI!
Come Join the success...

We will be offering Private/Small group beach lessons during the day!

High Velocity Team of The Week

Our 18's Eske/Towne Team in the very first two weekends of competition has continued to DOMINATE the beach scene! In the first three events they have taken home one 1st place Tournament CHAMPION, two 2nd place Gold wins---resulting in two bids: 1 to EVP Chicago National Chmapionships & 1 to ROX National Championship in Florida!!

SUPER STOKED to see what the rest of the season brings & how many more medals they add to their case!!  Best of ladies!

WOW...Isn't even the best word to describe our extremely successful opener weekend for our 2015 Beach Club!! We are awe struck on the amazing success our teams had!

Not only did we WIN many sets & matches, but all teams either met or exceeded their goals they had set! Way to be ladies!

Our 14's Alyssa Eske/Shea Lauria Team had an amazing showing going UNDEFEATED with a 4-0 finish making them Tournament CHAMPIONS at the EVP Firecracker Pro Am at Bradford Beach in Milwaukee! Earning a bid to the Chicago Pro Am Championship!

Our 18's Kalin Eske/Morgan Towne Team worked it out with a 2nd place finish at the EVP Firecracker Pro Am at Bradford Beach in Milwaukee! Earning a bid to the Chicago Pro Am Championship!

At the ROX VB Series Tournament in Lisle, IL our High Velocity Beach Teams had an even stronger showing...we had 4 teams representing & represent they did...landing all 4 teams in the GOLD bracket playoffs!!

Our 10's Rachel Rossing/Ryleigh Zeller Team fought their way through playing up in the 14's divsion & fight they did!! Strong serves & persistence propelled these two! Competing for the first time ever in sand...and finished 2nd in their GOLD bracket 12's final!!

Then we had our next 3 teams battle for their deserved WINS...

Our 14's Alyssa Eske/Shea Lauria Team once again with amazing digs & phenomenal teamwork took 1st in their pool landing them in the GLOD bracket  & fought hard almost falling to High Velocity's own Courchane/Swenski in semi-finals & pulling off the win in the finals against Cyclones with an overall finish 6-1 for the day...being crowned Tournament Champions!! Earning a bid to the ROX Series National Championship in Flordia!!

Our 14's Samantha Courchane/Maria Swenski Team competing in their first ever beach competition made amazing strides & with precise ball control made the GOLD Bracket & battled against High Velocity's own Eske/Lauria in Semi-finals almost wining taking home 3rd place for the club! Earning a bid to the ROX Series National Championship in Florida!!

Our 18's Kalin Eske/Morgan Towne Team really pulled it all together! Incredible teamwork, their hustle in the sand, precise passing & their shots they made allowing them to side out consistently! Landing them a GOLD Bracket spot! With an UNDEFEATED record of 5-0 crowning them the tournament CHAMPIONS! Earning a bid to the ROX VB Series National Championship in Florida!

High Velocity team of The Week

Our 14's Eske/Lauria team swept BOTH of their competitions during our opening weekend!! Two tournament GOLD 1st place Tournament CHAMPIONS & 2 National bids--this team is unstoppable! We are excited to what is yet to come!

Check out some of the pictures from our recent events!

Check out our Facebook page and make sure to like us, to keep up-to-date on everything going on!

Look for exciting happenings posted throughout the season! 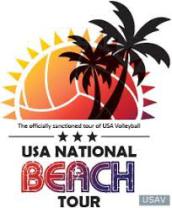